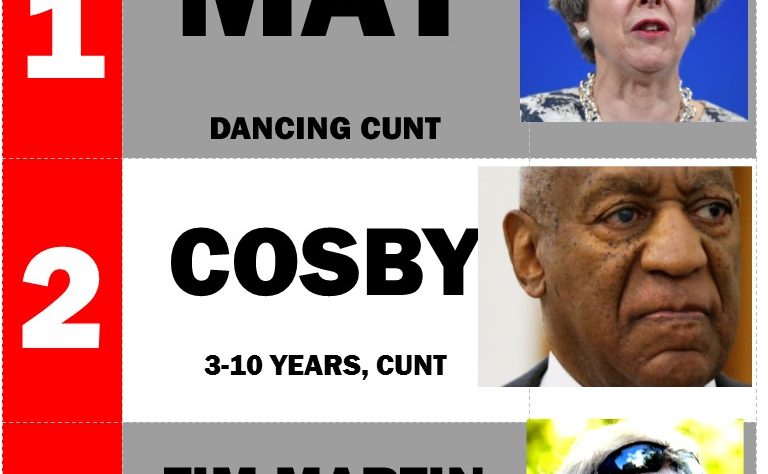 Who’s earned their place in the spotlight of shame this week? Why, it’s these cunts:

If people were medical conditions, May would be stubborn haemorrhoids that no ointment can heal. Dancing like the Queen of Constipation, May irritates the arse off the nation but cannot be shifted. She bluntly fails to satisfy anyone politically but somehow gets away with it because all the other options are so off the Cunt Scale that her everyday humdrum cuntery continues unchecked..

So the cunt actually got jail. Which is what you’re supposed to get for drugging and raping people.

Cosby used to be America’s favourite dad, one of the most powerful men in showbiz, but now he’s going to be anally raped by men more physically powerful than himself.

At least, that’s what we’ve been led to believe by just about any American film we’ve ever seen. Basically: if you go to jail then you have to be raped by a large powerful man. There don’t seem to be options or exemptions. It’s the only way.

Or maybe the prison shagger HAS to do it, contractually? I don’t know.

Wetherspoons cunt says his staff shouldn’t be striking for £10/hour.