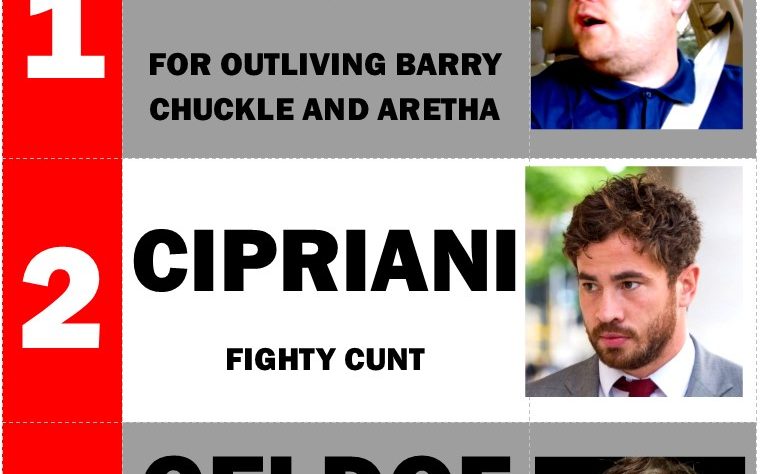 A little later than usual, here are the Weekly Top 3

So first place goes to James Corden. After all these months of hating James Corden, the passion has not dulled. Just one look at his pathetic face is enough to make me spit and roar the word. The word? You know what word I mean. And how he’s outlived the Queen of Soul AND the King of Comedy, so there’s no excuse. Corden: You are a cunt.

Second place this week is big fighty rugby cunt Danny Cipriani. He represents all the big, beery, fighty, rugby cunts that you get EVERYWHERE, spreading violence and bullshit and then getting all arsey about football fans being “hooligans”. A plague on the lot of you. Mind you, at least he took his punishment –  unlike that cricket cunt.

Third place goes to the ragged-trousered philanthropist himself, Bob Geldof who hasn’t done anything particular this week, but it’s always worth remembering.

Actually, when I say “ragged-trousered philanthropist”, I’m only talking about his look, his pose. Did you know – the cunt is worth 150 million dollars. I haven’t looked at the exchange rate this morning but I think that converts to 150 million pounds, more or less. It takes a special cunt to be known for charity and yet be worth that much. It takes a special kind of a cunt to be worth that much and look like a tramp. You’d think he’d spend some it on getting a haircut? Tight cunt. Would surely be Ireland’s number one cunt if it wasn’t for Cunto Colossus, Bono.

If we’ve missed anyone so far that you think needs to be awarded Cunto status, remember to nominate them.