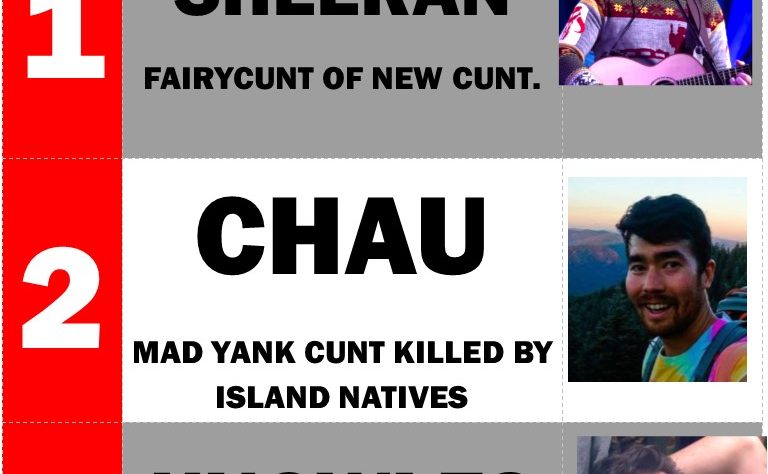 Yesterday we found out that Ed Sheeran has done a cover of Fairytale of New York.

Even though further investigation reveals this happened a year ago, it’s the first we had heard at Cunto HQ so that was Cunt of The Week all sewn up, no more questions.

And no, we haven’t listened to it. You know fine well it will be a dirty piece of shite.

But what about the other two slots in this week’s Cunty Top 3?

First up is John Allen Chau, a mad American cunt who seemed determined to reacg the uncontacted tribe on North Sentinel Island (Indian Ocean) to convert them to Christianity. His first attempt to land on the island was met with a hail of arrows but Chau didn’t get the hint, tried it again and was killed. From what little research we’ve done it sounds like the cunt’s own daft fault.

Last on the list this week is cold, calculating Jungle Cunto Nick Knowles, a traditional man on the telly who cynically endeared himself to the GB public by giving a woman a pillow. Aye, we see what you did there, cunt.

The worst bit was reading millions of cunts of Twitter falling for it. All the women were like “Eeeeh, that Nick Knowles is fucking lush”, “What a man”, etc.