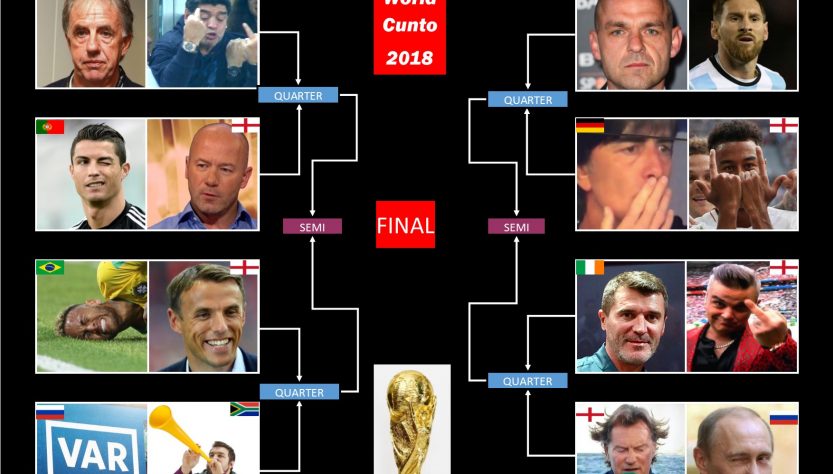 With the FIFA World Cup reaching the knockout stages today, it’s time to launch our own World Cup of Cuntos.

Who is the Cunt of the World Cup? Let’s find out. We will be running votes every day until the final and then we will send the World Cup of Cunts to the winner. This will pretty much be some plastic replica thing with the word CUNTO scrawled on it in permanent marker.

The quarter final ties are as follows:

Who is the cunt of The World Cup? Cunto's FIFA World Cunt starts today. Please retweet to get the votes in.
First match is between the world's grumpiest cunt and the world's highest cunt. Vote now.#lastsixteeen#fifaworldcunt#marklawrenson#DiegoMaradona

The first vote is up and running at Twitter: It’s Mark Lawrenson, the world’s grumpiest cunt versus smack-head extraordinaire Diego Maradona. Who’s the cunt? Vote here and whoever wins will be facing either Cristiano Ronaldo or Alan Shearer in the Quarter final.

None of the quarter-finalists are featured in the 2018 Cunto Cards but I might put the winner in the 2019 deck.