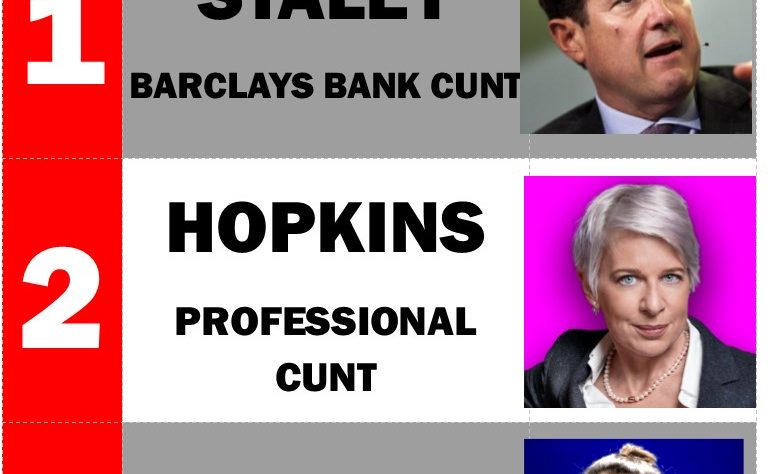 Here’s this week’s Top 3. The cunt from Barclays Bank tried to find a whistleblower, got caught and got himself fined over half a million pounds. Poor cunt. That’ll only leave him with ninety billion pounds (more or less) in his current account. Wee shame.

The others are brutal cunt-fuhrer Katie Hopkins and sappy Portuguese moan-cunt Salvador Sobral.

Up to now Cunto.org has always resisted putting Hopkins up for cunt status because she’s a pro troll and it’s so obviously what she would want.

But this week’s effort is just straight racism from an architect of Cuntery from whom we expect more challenging and creative cunt fuel. By the way, Hopkins is (at time of writing) beating Jimmy Savile on one of our Who’s the Cunt polls. That’s cunty.

You might not care about Eurovision but we love it here at cunto.org. The last guy in this week’s Top 3 is Salvador Sobral who won Eurovision last year with some snowflake shit about being sad and in love.

The song was a little different to many Eurovision winners as it was reliant on whimsy and pathos rather than fireworks and ass. Not our cup of tea, but the win was fair enough and it was the first ever win for Portugal so well done to them.

However, in the very moment of success, Sobral chose not to thank anyone in his speech and instead immediately attacked all the other contestants for being “fast-food music” in that self-deluded manner of singer-songwriters everywhere who somehow think that they alone have cracked the code of human experience and that the rest of us are brainless consumer drones.

At the time, he was flamed hard for being a self-centred, arrogant snowflake wank-cake.

That was a year ago But this arrogant human has not learned his lesson and has been back sniffing around the contest this year and writing off the songs, seemingly amazed that his win hasn’t changed the contest into something more meaningful.

This level of self-importance makes Piers Morgan look like one of those penguins that does a death march to save their egg. He’s a colossal prick and a pure worstcunt but I know most of you couldn’t care less about Eurovision and that’s the reason why he’s only number three.

Next week: James Corden to return? Quite possibly.