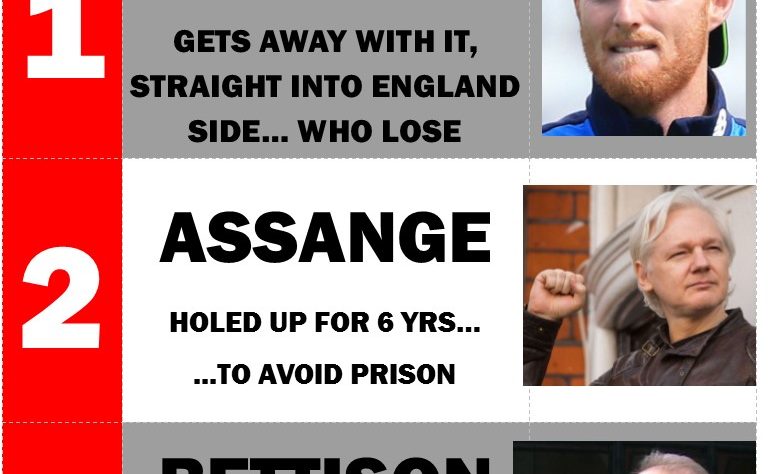 This week’s Top 3 has a legal flavour:

First up is punchy cricket thug Ben Stokes. So he knocks some cunt out, does a court, somehow gets away with it and is straight back into the England cricket team, who promptly lose to India. What a cunt.

Second is Julian Assange who was scared of jail, so he ran into a tiny London embassy (Ecuador’s) in June 2012 and he’s still there now. To be honest, there are probably worse cunts in this story but it’s complicated and there’s a lot of reading involved. Sometimes it’s just easier to go with one’s gut instinct, take a look at his face and declare: he looks like a cunt – so he probably is a cunt.

Third is the Hillsborough Cop “Sir” Norman Bettison who was going to eventually face charges, but a witness has died and other evidence has “changed” so, that’s it – better just let him off. Cunt-play is suspected.

To be fair to all three – Cunto staff haven’t had long to prepare this week’s Top 3 and it could be that some or all three of them are NOT cunts, and that they have made this list upon scant reading of the facts. If you want to defend them, go ahead and do so in the comments.

Bottom line is that they all LOOK like cunts and in the court of Cunto, that’s enoguh.