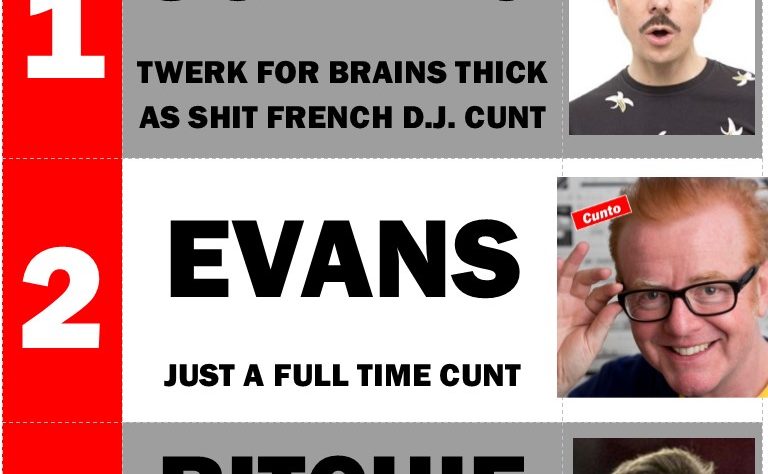 This was the sex-mad French misogynist and DJ who FIFA wisely selected to make the first ever award for Female World Player of The Year. Solveig marked what should have been a breakthrough moment for women’s football by asking the Norwegian winner if she could Twerk.

Jesus Christ. What a cunt. I’m not aware of the ginger dish-rag doing anything in particular this week but his relentless, full-time cuntery and terminal self-promotion mean he’s never very far away from the chart. He’s like England’s answer to Bono. The cunt that won’t go away.

Footballers who “declare themselves unavailable” for international games are cunts. It’s like saying

“Yeah, sorry: I just want to concentrate on extracting every single penny from my monstrously over-valued career and keep making myself even richer than I already am, which is richer than you’ll ever be. Sorry plebs, but the idea of giving something back just doesn’t sit well with my goal of ever-expanding personal wealth.”

So that’s a cunt move. And see, when you’ve only been picked once in the last three years anyway and you still feel the need to declare your unavailability? That’s double cunty. Scotland won’t miss you, cunt.