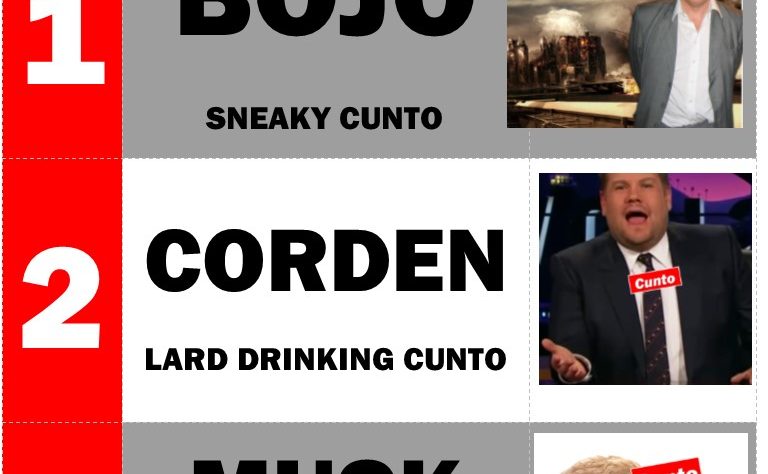 Here’s the shits and bastards than have floated to the top of the Cunt pond this week:

The chart is led by Boris Johnson who would probably sell a child into known slavery in return for becoming Prime Minister. He is not only Top Cunt of The Week, but also a leading candidate for Britain’s greatest Self-serving Cunt of the Year.

Second on the list is familiar fat cunt, James Corden, who has been slobbing about in Los Angeles, feverishly sweating a bucket of liquid lard every time he gets close to a genuine famous person.

Elon Musk was calling one of the Thai Cave rescuers a “pedo” and now is engaging in some fruitless effort to prove that his submarine would have worked if only the professionals hadn’t solved the rescue first. What a wanker. He then complains that the media, particularly the BBC refers to him as a billionaire because use of the word “devalues & denigrates the subject”, according to billionaire wanker Musk.

So he calls a rescue hero a pedo but he doesn’t like us calling him a billionaire. He wants us to call him an engineer. Well there is a third way Musky boy, how’s about we’ll neither call you “billionaire” nor “engineer”? Tell you what, we’ll just split it down the middle and call you a cunt. OK?