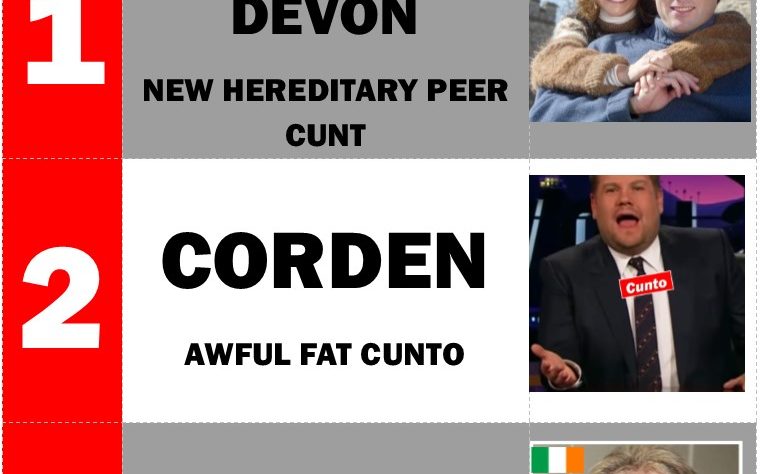 I genuinely thought that Tony Blair (cunto) has gotten rid of hereditary peers but now I read that a new one has been “elected” to the House of Lords this week. And when I say elected, I mean by about 20 other old cunts.

The Earl of Devon (real name Chas) is also married to a tiny American sex dwarf from Beverley Hills 90210. What a cunt.

The other spots in this week’s Top 3 are occupied by blob-man James Corden and human virus Mark Lawrenson.

Corden is also a potential House of Lords member, perhaps with the title Baron Unfunny de Fatcunt. Corden hasn’t done anything newsworthy this week but his mere existence is enough to keep him in the top 3.

Mark Lawrenson is so miserable that he if he sees a child enjoying themselves he goes right up to them and reminds them that one day they will die.

That’s certainly the impression his co-commentating engenders. Several BBC viewers have reported cancer of the ear. I’d be surprised if all of this was not true.