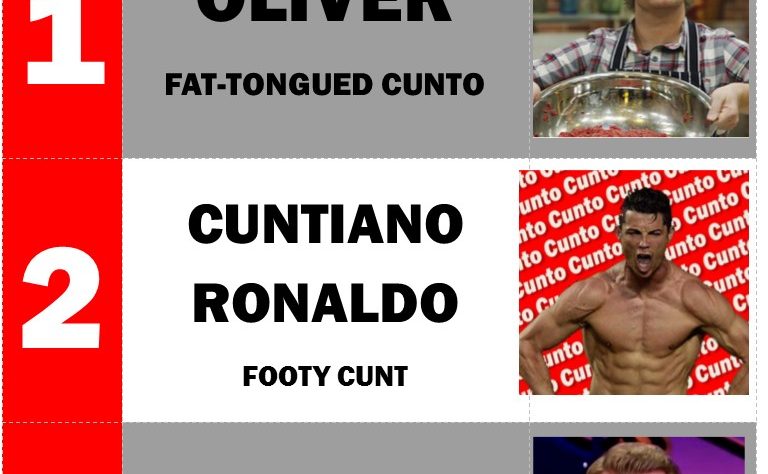 Portuguese are, in our experience, great people. They’re relaxed and like a laugh and tend not to shut hospitals, hide taxable earnings and punch old ladies in the arse. As far as we’re aware.

So it was a small surprise earlier this week when lead Portugeezer Cuntiano Ronaldo was nominated for Cunto status by Cunto reader Adrian.

Despite his arrogance and posturing and blatant diving in the box and then following up his failure to win a penalty kick with a shit-eating grin, Ronaldo was unable to best this week’s main Cunto, Jamie Oliver who is back at the top of the charts again, simply by being himself.

Like a true champion Cunto, Oliver doesn’t actually need to do anything in the news to wind you up, you merely have to think of him to get THE RAGE, and there he is at number one.

And of course, the porky purveyor of non-hilarity, Mister James Fucking Corden takes the final spot in the charts.

The vile self-aggrandising blob-job has doing some shit with England players in a desperate attempt to hook his shit wagon   to the cavalcade of athletic prowess and skillful display that is the World Cup.

remember – there’s someone not on the Cunto Rank that should be, you can nominate a new cunt.

Plus: two of the human disgraces above are available on the 208 Cunto Cards deck. Get a pack today.